In this article, I’ll tell you how to implement userspace file system using Java without a line of kernel space code. I’ll also show you how to connect Java and native code without writing C code and save maximum performance.

Originally, I posted this article on habrahabr (in Russian). 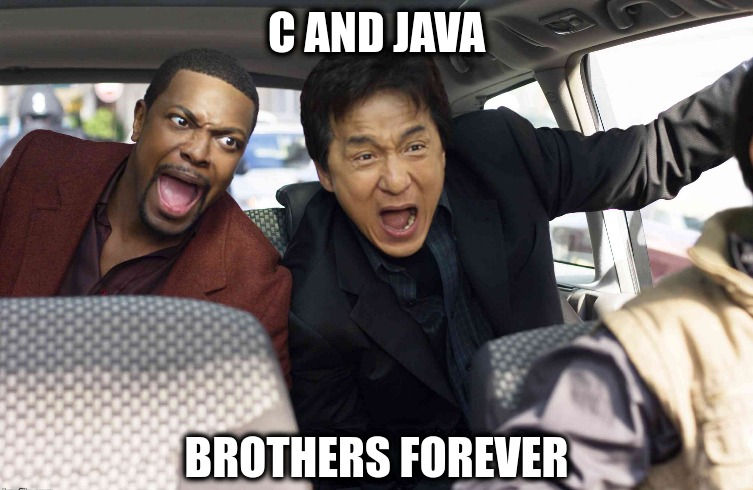 First of all, it is important to understand what FUSE is. FUSE - FileSystem in Userspace - helps users without any privileges to create their file system without a necessity to write code in a kernel space.

This is possible because the filesystem code runs in userspace. And the FUSE module is just a bridge between the kernel API and your code. FUSE was officially included in the Linux source tree in 2.6.14. 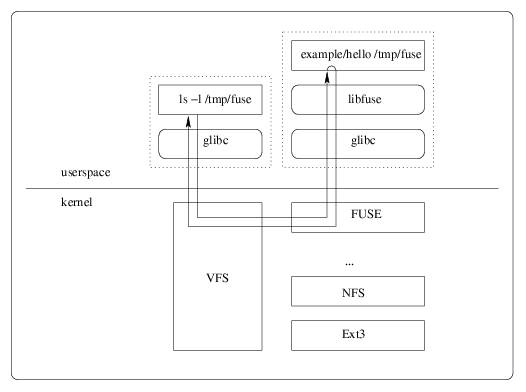 So, you can easily create your own filesystem (here is the simplest example). There are a lot of areas where you can use it. For example, you can quickly write a FS where Github or DropBox would be the backend.

Or, let’s imagine, you have a business application where all user files are stored in a database. But your client wants to have access to them from a filesystem on the server. Of course to duplicate files in the filesystem and the database is the wrong decision. And here FUSE comes in; you just need a little FUSE program which handles all user requests to the directory and redirects them to the database.

So far so good. But implementation of FUSE starts from "include header <fuse.h>". But your business application is written in Java. Obviously, it is necessary to communicate with the native code.

The standard tool for a native communication in Java is JNI. But it brings a lot of complexity. Especially because for using FUSE we need a lot of callbacks from the native code to Java. And "write once" is suffering in this case (However, in the case of FUSE it is not so important). If you try to find projects that implement a FUSE wrapper using JNI you will find a few projects, but they have been obsolete for a long time. And their API is very inconvenient.

Another option is JNA library. JNA (Java Native Access) gives you the possibility to get access to the native code easily without using JNI only by using Java code. It is very easy; you just need to declare an interface which matches the native code and get an implementation through "Native.loadLibrary". And that’s all. Another advantage of JNA is very detailed documentation. The project is alive, and it is in active development.

Moreover, a good project implementing FUSE using JNA already exists. But JNA has a lot of problems with performance. JNA is reflection based, so jumping from native code to Java code with data conversion is very expensive. It is not so important if native calls are rare. But a FS has a lot of native calls. The only way to speed up fuse-jna is to read files using big chunks, but it doesn’t always work. For example, when you have no access to a client’s code or when all files are small. Obviously, we need a library that combines JNI performance and JNA convenience.

And here is where JNR (Java Native Runtime) comes in. JNR, like JNA, is based on libffi library, but it uses a bytecode generation instead of reflection. And as a result, JNR achieves excellent performance. The information about JNR is very limited. The most detailed piece of information is Charles Nutter’s talk on JVMLS 2013. But despite the lack of information, JNR is already a big ecosystem actively used by JRuby. A lot of jnr-based libraries such as unix-sockets and posix-api are actively used by different projects. 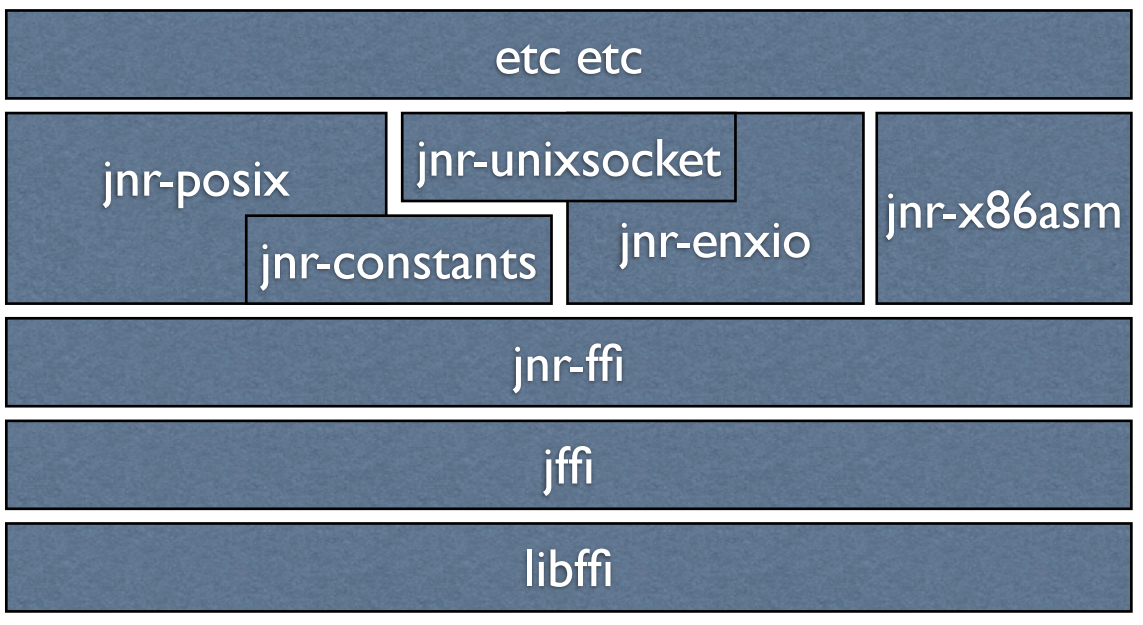 JNR is a library which became a basis for the development of JEP 191 - Foreign Function Interface, which is targeted for Java 10. In comparison to JNA, JNR has no proper documentation, and you need to look for answers in the source code. That is the main reason for this mini-guide.

Here we are the loading java library which matches the native interface by name.

In the case of FUSE, we need an interface with method fuse_main_real where FuseOperations structure with all callbacks passes as an argument.

Often you need to work with structure which is located at a certain address, for example with fuse_bufvec structure:

For its implementation, we need to make a successor of jnr.ffi.Struct.

After that, you have to set proper callback implementation into the getattr field.

Enum implementation is not so obvious as other parts of the library. You need to inherit your enum from jnr.ffi.util.EnumMapper.IntegerEnum and implement method intValue

This knowledge is enough to implement a simple cross-platform wrapper for some native library.

What I’ve implemented is a FUSE wrapper in my project jnr-fuse. Previously I used fuse-jna, but it was a bottleneck in the FS implementation. During the development, I tried to save compatibility with the native interface (<fuse.h>).

In my case the FS was read-only, and I was interested in throughput. The performance will mostly depend on your FS implementation, so if you already use fuse-jna, you’ll be able to change it easily to jnr-fuse, write a test, and to see the performance difference on your workload. (It will be helpful anyway because we all love to achieve new levels of performance, right?)

In order to show performance the difference, I moved MemoryFS implementation from fuse-jna to jnr-fuse with minimal changes and ran a reading test. For the test, I used fio framework. 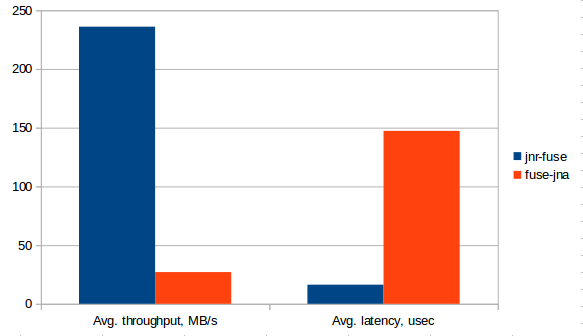 The only information this test shows us is the difference in reading a file using fuse-jna and jnr-fuse, but it gives us an understanding of the level of performance difference of JNA and JNR. If you are interested, you can write a more detailed test for native calls using the JMH tool.

The performance differences in throughput and latency are about ~10 times. Charles Nutter in his presentation gave us the same numbers.

The jnr-fuse project is located on GitHub. I’ll appreciate stars, pull-requests, and comments. I’ll be glad to answer any questions you have about JNR or jnr-fuse.